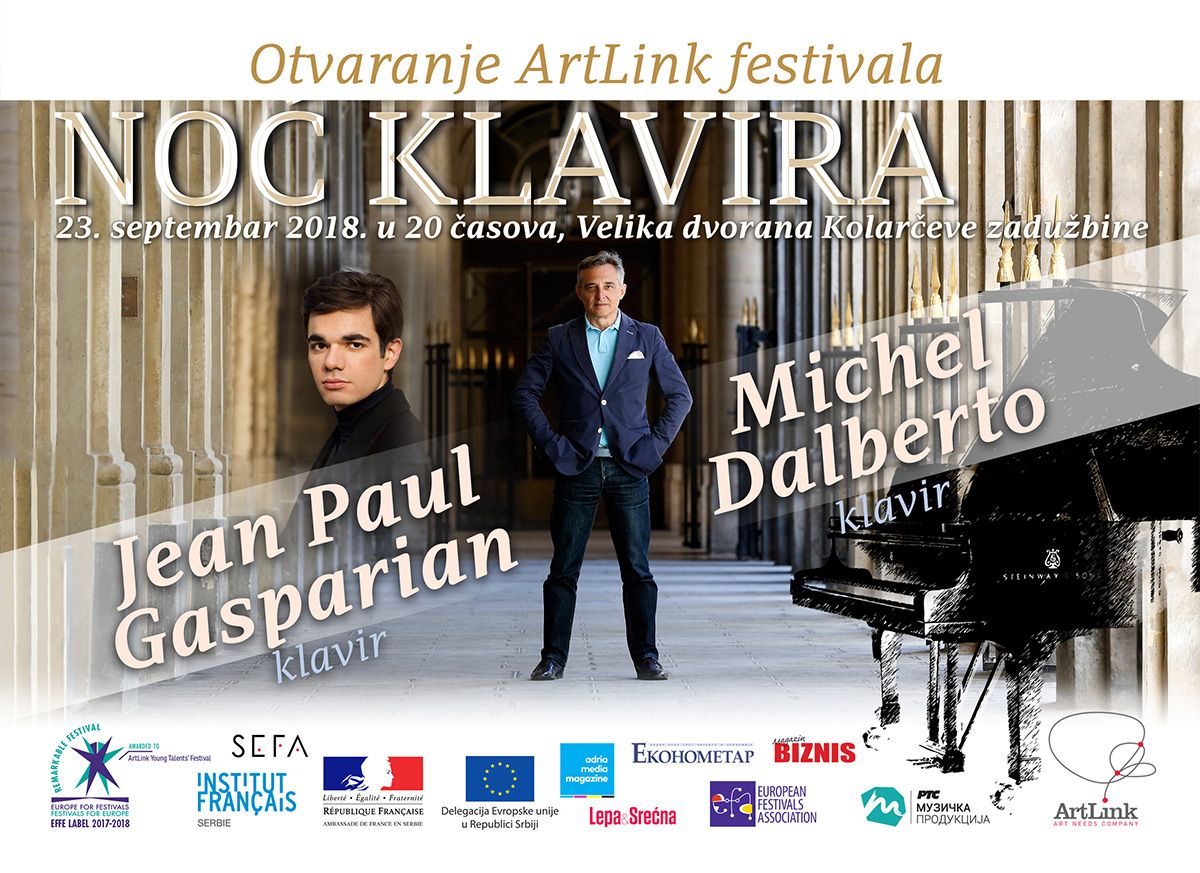 “IN THE RHYTHM OF CLASSICS”
Fifth ArtLink Young Talents’ Festival The “Night of the Pianos” gala event will officially open this year’s 5th ArtLink Youth Talents’ Festival, on Sunday, 23 September 2018 at 20h, in the Great Hall of the Kolarac Endowment. The “Night of the Pianos” event will stage concerts by outstanding French pianists Michel Dalberto and Jean-Paul Gasparian.
“Michel Dalberto is one of the most important music artists in France today, and Jean-Paul Gasparian is certainly one of the greatest rising stars in France, but also on the European music scene. The two pianists will present themselves with their solo programs, but will also perform works for two pianos and four hands,” said Pianist Jovanka Višekruna Janković, Artistic Director and Founder of the ArtLink Young Talents’ Festival.
The “Night of the Pianos” event will mark two significant anniversaries: Michel Dalberto will devote his program to the works created during the First World War and will be a homage to Claude Debussy on the occasion of the centenary since the great composer’s death. The co-organizer of the event is the French Institute in Serbia, and the concert will also mark the Great Centenary of the end of the First World War and the French-Serbian alliance. The “Night of the Pianos” event is supported by the Embassy of the French Republic in Belgrade. Tickets for this event are available at Eventim’s outlets, with a discount of 20% until 1 September, and from 3 September also at the Kolarac Endowment ticket office.
In addition to the “Night of the Pianos” opening this year’s ArtLink festival, guests of the fifth edition of the festival, under the slogan “In the Rhythm of Classics”, will be young pianist Adik Neuhaus, a descendant of the famous pianist family Neuhaus – its fourth generation, who will be introduced to the Festival’s audience by a recital at the Gala Hall of the Belgrade City Hall on 26 September.
In cooperation with the House of Legates, for admirers of painting and music, on Tuesday, 25 September from 11.00 to 15.00 hours, professional guidance will be organized through the exhibition of the Museum of Petar Lubarda, at 1, Iličićeva Street, in Dedinje. The ArtLink Young Virtuosi will stage a concert in the same space on Friday, 28 September at 20.00 hours.
This year, the ArtLink Festival, in cooperation with the 21st Pedagogical Forum of Stage Arts and the Faculty of Music, presents several programs: on Thursday, 27 September, at 19.30, in the Cultural institution “Parobrod”, a concert of music for voice and piano, and on Saturday, 29 September at 18.00, in the Cultural institution “Vuk” – a Dance-choreographic performance “Music-Movement-Space: Music in the Interpretation of the Movement”, by Anna Galikowska-Gajewska and Marzena Kaminska, professors of the Music Academy in Gdansk (Poland), and the musical “Rodgers & Hammerstein The Sound Of Music”, by fourth-year students of Music Pedagogy at the Faculty of Music in Belgrade.
In cooperation with the Kolarac Endowment, a part of the Festival’s program will be a musical promenade, featuring young flautist Mariana Busslechner from Austria, with pianist Alisa Bešević, on 30 September, at 11.00.
ArtLink Festival will be closed on 1 October, by a gala concert in the Great Hall of the Kolarac Endowment, in cooperation with EUNIK, featuring the Festival chamber ensemble “ArtLink Young Virtuosi” with Serbia’s prominent concertmaster violinist Robert Lakatoš and Italian soloist Giorgio Mandolesi, first bassoon of the Orchestre de Paris. The concert will feature works by Vivaldi, Bach, Sedlar and the Serbian premiere of music by Austrian composer Romano Kariolou, who will be introduced to the Festival audience for the first time.
The Fifth ArtLink Young Talents’ Festival will take place in cooperation with the French Institute, the Embassy of Israel, EUNIK, the Italian Institute, the Department of Culture of the Hungarian Embassy, the Embassy of the Republic of Austria and the Austrian Kulturforum in Belgrade.