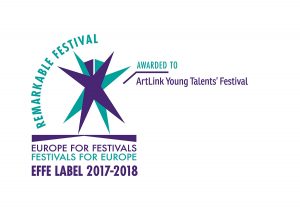 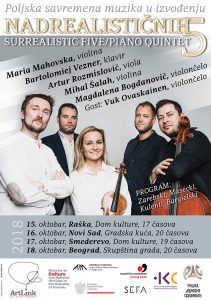 Surrealistic Five is an ensemble consisting of most interesting polish musicians. For many years members of the piano quintet have been performing as soloists and chamber musicians at numerous concerts and music festivals. They are also prizewinners of many prestigious music competitions. In their repertoire, they try to focus especially on contemporary music and to promote the creative output of Polish composers. Most importantly, Surrealistic Five are artists who decided to unite in chamber music – their common passion. They wish to share this passion with listeners and invite them at the same time to a unique and truly breathtaking world of music. The ensemble name is related to an original title of “Smokey-white” Piano Quintet – first composition written for the ensemble and was suggesting by Hanna Kulenty.

Prizewinner of the 13th International Henryk Wieniawski Violin Competition in Poznań (2006). She holds the position of concertmaster at the Warsaw Philharmonic Orchestra.
Born in 1987 in Warsaw. As a soloist and a chamber player she appeared on the stages of such significant concert venues as Carnegie Hall in New York, Disney Hall in Los Angeles, the Great Hall of Tchaikovsky Conservatory in Moscow and the Conservatories in Salzburg, Bern, Lausanne, Geneva, Basel, Locarno, Vienna and Madrid.
She studied violin with Mirosław Ławrynowicz, Marek Zebura and graduated from the class of KonstantyAndrzej Kulka at the Fryderyk Chopin University of Music in Warsaw.
She has performed with the majority of Polish philharmonic orchestras, including the Warsaw Philharmonic Orchestra, the Sinfonia Varsovia and the Polish Radio Orchestra. She participated in the European concert tour of the Polish Chamber Orchestra during which the ensemble performed with Maxim Vengerov in the most renown European concert halls, including Berliner Philharmonie, Auditorio Nacional de Música in Madrid, Barbican Centre in London.
Maria Machowska won 5th Prize at the 13th International Henryk Wieniawski Violin Competition in Poznań (2006), Special Prize of the Jury led by Gidon Kremer at the International Leopold Mozart Competition in Augsburg (2006), 1st Prize at the International Niccolo Paganini Competition in Wrocław (2004) and 3rd Prize at the International Karol Lipiński and Henryk Wieniawski Competition in Lublin (2003).
In 2007 and 2012 the violinist received the “Young Poland” scholarship. She has been the concertmaster of the Sinfonia Varsovia Orchestra since 2008. She has been an assistant professor at the Frederic Chopin Music University in Warsaw since 2013.

Polish violinist born in 1984. He is a winner of the 1st prize at St Martin’s Chamber Music Competition in London (2011) and also 1st prize in 19th International Chamber Music Competition held in Thessaloniki, Greece (2010).
Michał Szałach graduated from the Feliks Nowowiejski Academy of Music in Bydgoszcz in the class of Paweł Radziński. He perfected his music skills with Vadim Brodski, Sergey Kravchenko and Victor Pikayzen.
In 2016 he completed his doctoral studies with the degree of Doctor of Musical Arts and started working at the Feliks Nowowiejski Academy of Music in Bydgoszcz as Assistant Professor.
Since 2009 he has been a member of the Warsaw Philharmonic Orchestra. He has given recitals in Germany, Finland, Czech Republic, United Kingdom, Netherlands.
In 2011 he received Dartington International Summer School Financial Assistance Award for Master Class with Stephen Kovacevich and “Young Poland” Scholarship Program of the Minister of Culture and National Heritage. He has recorded for most prestigious polish record company CD ACCORD.

Polish violist, finished Chopin University in Warsaw with Prof. Błażej Sroczyński. Between 2004 and 2006 he received a scholarship and continued his education in Guildhall School of Music and Drama in London with Prof. Jack Glickman.
The principal violist in NFM Wrocław Philharmonic Orchestra and a member of the Lutosławski Quartet. As a chamber musician he was invited to a number of festivals – theatre and music i.a. Warsaw Autumn, Chopin and his Europe, Wratislavia Cantans, Pacific Music Festival. He also participated in many masterclasses i.a. in Łańcut, London, Ottawa (Canada).
He perfected his music skills with P. Zukerman, M. Tree, S. Kamasa and cooperated with such orchestras and conductors as London Symphony Orchestra, Polish Radio Orchestra, National Basque Orchestra, Sinfonia Juventus, World Orchestra For Peace and Jacek Kaspszyk, Gabriel Chmura, Michael Tilson Thomas, Valery Gergiev, Sir Colin Davis. He has given recitals all over Europe and in Asia and the USA.

Soloist and chamber music instrumentalist. Born in 1987 in Poznań. As a chamber player, he is a winner of the 1st prize at St Martin’s Chamber Music Competition in London (2011) and also first prize in 19th International Chamber Music Competition held in Thessaloniki, Greece (2010). As a soloist, he is also a prize winner of the International cello competition in Liezen, Austria (2nd and 3rd prize), winner of the national young cellists’ competition in Bydgoszcz and prizewinner of international cello competition in Kosice, Slovakia. Filip Syska studied with Andrzej Bauer and Bartosz Koziak class and he graduated from the Feliks Nowowiejski Academy of Music in Bydgoszcz. He also holds a doctorate degree in music since 2017. He was a principal cellist of the Polish Sinfonia Iuventus Orchestra in Warsaw. Since 2018 he is a soloist of the Ignacy Jan Paderewski Pomeranian Philharmonic in Bydgoszcz. Participated in many master classes conducted by esteemed cellists such as S. Hönigberg, K. Michalik, P. Głombik, A. Orkisz, T. Strahl and in chamber music classes led by R. Pidoux (Trio Wanderer), M. Moś, J. Kaliszewska and E. Pobłocka as well. In 2011 he received Dartington International Summer School Financial Assistance Award for Master Class with Stephen Kovacevich and “Young Poland” Scholarship Programme of the Minister of Culture and National Heritage. Filip Syska’s music repertoire and his collaborations with modern composers demonstrates his commitment to enlarging the cello repertoire. He is a highly acclaimed recording artist. He has recorded for most prestigious polish record company CD ACCORD. In 2013 he made his debut CD with polish chamber contemporary music (Landscape of memories) with BMF Piano Trio. Since 2009 he is also a member of cello octet The Warsaw CELLONET Group which often combines ancient and contemporary music into their concert programs.

One of the most versatile pianists of his generation: a soloist, a chamber music instrumentalist, a teacher, and a promoter of culture.
Mr Wezner is the winner of a number of international chamber music competitions: St Martin’s Chamber Music Competition (2011, London – 1st prize), 16 Premio Trio di Trieste (2015, Trieste – 3rd prize), Academie de Musique de Lausanne (2015, Lausanne – Laureate), the 50th International Vocal Competition ‘s-Hertogenbosch (2014, Holland – laureate of the Lied Duo category). As a soloist, he won the Special Prize at 6th International I.J. Paderewski Piano Competition in Bydgoszcz (2004) as well as an Honorary Mention at the 15th International L. Janáček Piano Competition in Brno (2008, Czech Republic).
Born in Nysa in 1981, he graduated from the Feliks Nowowiejski Academy of Music in Bydgoszcz in the class of the piano taught by Professor Ewa Pobłocka (2006). In 2013 he completed his doctoral studies with the degree of Doctor of Musical Arts, and, in 2014, started working at the Feliks Nowowiejski Academy of Music in Bydgoszcz as Assistant Professor as well as the dean of the Inter-Departmental Faculty of Piano Chamber Music.