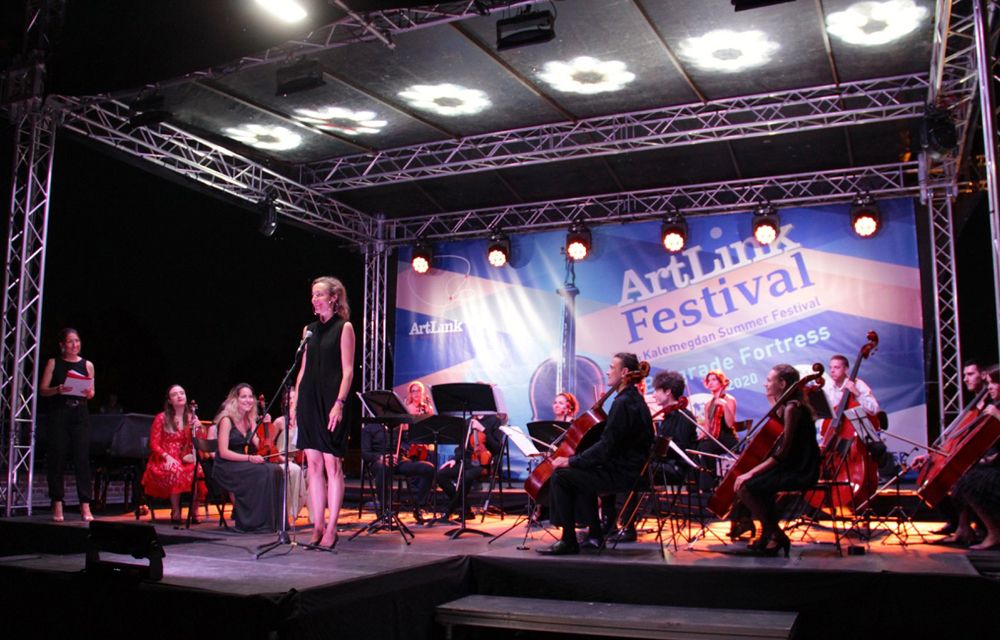 Kathrin Deventer at the opening of ArtLink Festival

Kathrin Deventer at the opening of ArtLink Festival:

ArtLink Festival took place this year at the Belgrade Fortress with several open air performances.
The Festival was opened on 10 September with a performance by Camerata Balcanica and Belgian conductor Mr Benjamin Haemhouts, with the program titled “Italian Journey”.

Ms Višekruna Janković pointed out that youth, talent and creative energy made this program happen. “Symbolically, the ArtLink Festival, staged for the first time in front of Monument “Victor” – a symbol of Belgrade – could proudly announce that this year’s Festival is the Victory of Music! The Festival is joining the initiative “ Artists for Nature” by performing Pastoral Symphony by Beethoven in the arrangement for strings and the celebration of 75 years of the United Nations. The realisation of the program is the success of common efforts of all partners involved, including the support of the Western Balkans Fund (WBF), the International Visegrad Fund, the Delegation of EU in Serbia, the Italian Institute and many others including the European Festival Association and its network and team.”

“We festivals are attentive guardians of artists’ ideas. Artists’ creations are central to everything we do. Their audience is our audience. More than ever, our concentration is determined to facilitate a meeting place between creative minds and their admirers. This year, an insidious and underestimated microbe has bitten a hole in history. Everything – our society, politics and science – has been undermined. Nations have rushed to come up with new strict rules and strategies to survive. Borders closed, distance became the buzzword. 2020. It is the antitheses of the development we have sought and aimed to realize this century. The world is in quarantine.

In the meantime, we all learned that we have to mind and protect ourselves. People, cities, regions, countries avoid each other. We learned to cross the street and walk on the other side. We are all dangerous, all in danger. This is in such contrast to our festival ambitions, our ethos. The Arts are instruments for living, gifts of excellence that connect us, that ask us to explore and to make efforts to understand…the real meaning behind the things, the intentions. Just imagine our history without artistic expression, without the wonders of creative minds. We cannot. We cannot tolerate a world without the arts. Without them we cannot progress.

We, the European Festivals Association, assert that we will create a history for Europe. We undertake to help complete recovery from the damage caused by this Corona virus. We cannot permit ourselves to anything less. Citizens need the arts. And Europe has to protect and serve people’s needs and rights. Our festivals community was created in 1952, after the Second World War, to bridge the distance between people and to shape Europe as a cultural project. With our commitment to Europe and to worldwide relations – with thousands of artists – we have to continue creating places of encounter, of human interaction, of co-presence.

We congratulate Jovanka Višekruna Janković for her endless and committed work for the artists and the arts, in the region, and in Europe.”