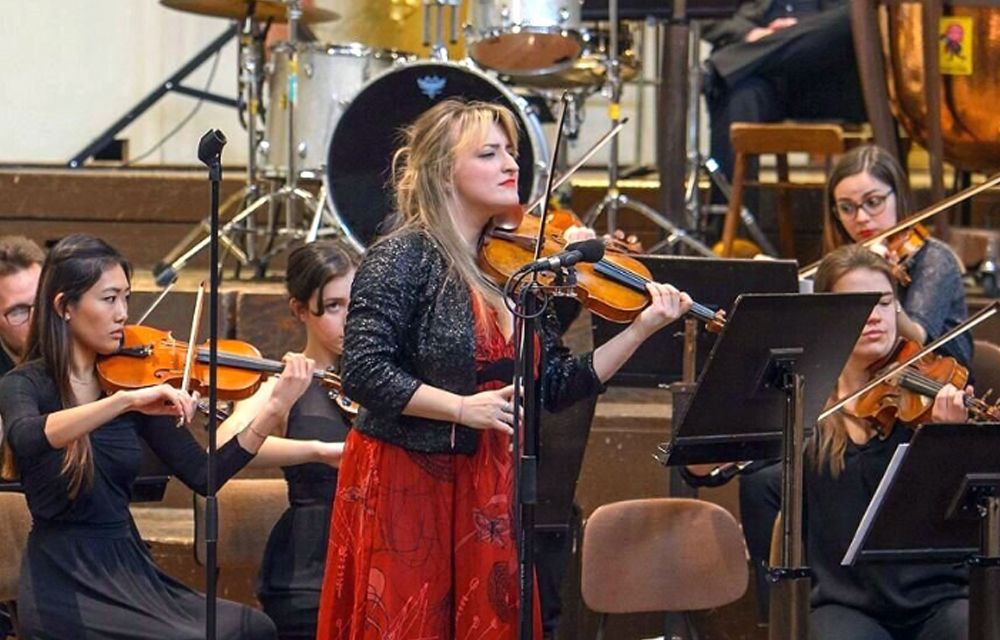 “One of those rare artists who possess a Renaissance-like versatility, wide perspective and a true understanding of music and the arts”.

Andrea Nikolić has established herself as one of the most exciting and versatile artists of her generation. She is internationally sought-after violinist, violist, artistic director, pedagogue, leader/conductor and a musical activist, tirelessly active as arts and education ambassador, always aspiring to do, create and learn more.

Born in Sarajevo, Bosnia and Herzegovina, she grew up in Varaždin, Croatia, and has found her artistic home in the “center of classical music” – Vienna, Austria. Praised for honesty, integrity, versatility, imagination, depth and dedication in her approach to music and her musical interpretations, she is wholeheartedly exploring a diversity of musical languages, styles, genres, and ideas to bring the art of music closer to the broader audiences and make it accessible to everyone.She is a founder, producer, general and artistic director of Vareš Classic Festival – International Chamber Music Festival in Bosnia and Herzegovina and a founder, leader & artistic director of the Vienna – based WISE: Wien – International Soloists Ensemble. In 2020 she founded CRO-ArT, a festival of contemporary art music in Vienna, as a sign of rebellion towards the horrible situation the culture has found itself in due to the pandemic.

Andrea’s interest and repertoire include works from early and traditional music to contemporary music, improvisation and jazz. She enjoys long lasting inspiring collaborations with artists such as Nataša Veljković, Saša Mirković, Borut Zagoranski, Ivana Nikolić; composers Margareta Ferek Petrić, Meinhard Rüdenauer, Gabriele Proy, Peter Seabourne; conductors Mark Stringer and Johannes Wildner and violist and producer Petar Krešimir Pustički. And many more! She is passionately promoting new music and there is already a vast number of pieces written and dedicated to her – some of them being published by the Dutch publisher “Donemus” in her own revision. A full CD with these works is going to be published in 2021 and a new solo CD with both violin and viola is planned for 2021/2022 in collaboration with Stipe Bilić. Since 2017 she is working with an Iranian architect Hessamedin Fana, creating interdisciplinary projects presented in all the WISE concepts as well as in the past four VaClaF editions. She plays a 1879 S. Nemessany violin, a contemporary viola and her strings of choice are Thomastik Infeld.

She started to play the violin in the Varaždin School of Music with Benjamin Šambar, continued at the Zagreb Music Academy with Maja Dešpalj Begović and University of Music and Performing Arts Graz with Eszter Haffner and Andrej Bielow. Since 2010 she has been living and working in Vienna. During her studies she won several prizes and scholarships, allowing her to enter the international stages and gather priceless experience in a variety of fields. Subsequently, many doors opened after her very successful concert debut at the London Handel Festival 2012.

She participated in many prestigious international soloist, chamber music, historically informed and contemporary music performance schools and masterclasses, with Dora Schwarzberg, Catherine Macintosh, Laurence Cummings, Jože Haluza, Elisabeth Harnik, Artemis Quartet, Shanghai Quartet, Arditti Quartet and Phillippe Manoury leaving some of the strongest influences. Through years of Aestas Musica she worked with some of the most distinguished experts for early music from Royal College and Royal Academy of Music London.

Active collaborations with contemporary composers brought her recent research focus to female art and artists and their wider public presentation, which has significantly influenced her artistic views and concepts.